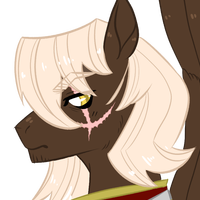 Spirit stamp: an upwards facing sword with wings on either side

Talent: War is an extremely capable flier and excels at air-borne combat and strategy

Likes: collecting swords, food with carrots in them, spending time with his family (as he does not see them much due to his duties), flying over the countryside, quiet days

In-depth: War Wing is a large pegasus from a high noble family, he is the commander of the Winged Legion of the Imperial army. The first born males of his family have always been trained hard to obtain this position from their father. It is considered a great honor to retain such positions within the family as it shows that the family is strong and capable.

He is very close with his mother but has a strained relationship with his father. His father trained him constantly as a foal to prepare him for the army; this caused War to miss out on his foalhood as he wasn't allowed to play with others or anything like that. Instead he was pushed to study and train.

War Wing is a stern leader who commands respect, he does not allow discord within the ranks and he personally oversees the training of his soldiers. He is the type to consider his options very carefully, he will not make a decision unless he has weighed the pros and cons. He will not risk the lives of his soldiers unless the reward is worth the potential losses. This makes him popular among the soldiers and he is well liked due to his genuine concern for their lives. For him holding the lives of his soldiers in his hooves is a heavy burden and one that he will not take lightly.

Despite his stern demeanor he is polite when speaking to others, especially to females, and is always well mannered even in the most uncomfortable situations. As he is a noble he knows that he must always appear in control but the stress of his occupation and the expectations of those around him cause him to hide his stress, making it worse. He frequently loses sleep and holds deep regrets that eat at him, mainly having to fulfill orders that he morally disagrees with. When he does sleep he often has nightmares.

When he is around close friends he shows a very gentle and kind side, finally allowing himself to shed his mask. He didn't have much of a foalhood and was forced to grow up fast, because of this he is a bit hesitant to partake in "childish" activities but once he starts he enjoys himself.  He dislikes sharing his worries and stress with others but will do so if a close friend wants to hear him out. He does find relief in sharing his worries and getting advice but at the same time he feels guilty for putting a part of his burden on his friends.