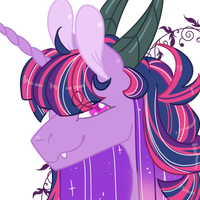 Allegiance: herself and her family

Dislikes: non-sugared treats, decaffeinated drinks, birds (hates them), her books out of order (she has them stored by genre)

In-depth : as the daughter of Princess Twilight and Discord, Amity has a chaotic personality matching her looks. While most of the time she is calm and caring she does have another more random side to her that comes to the surface from time to time. This random side consists of creating chocolate rain clouds, transforming into strange creatures, taking her own head off, twisting her body into knots and many other colorful tricks. This changing of personalities tends to drive away everyone but the most of loyal friends who understand that this is simply a part of her nature due to her parentage. When Amity is in her default calm mode, she is incredibly kind and always offers a shoulder to cry on.

Amity lost her mother long ago in the Great War of the Golden Plains against the Changeling Army. In the war Princess Twilight was killed and while it is difficult to kill an alicorn, it is not impossible. She then later lost her father Discord when he used himself to seal away Princess Celestia who had gone mad after the death of her sister Princess Luna.

Amity is very protective over her adopted daughter Dawn Breaker and will do everything in her power to keep her close.