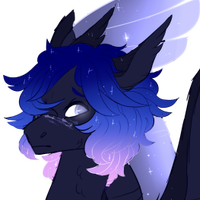 Spirit stamp: a white half moon with two grey clouds

Talent: latent spiritual connection with the moon and night

In-depth: Skyfall had a rough time growing up, right from his birth he has been plagued with trouble. While he may look like a pegasus he is actually an alicorn much to the surprise of his parents when he was born. Everyone who was there for his birth was sworn to secrecy under the pain of death and he quickly had his horn removed to prevent him from using his magic. However his unique coat and cosmic appearance marked him as a magical being and just cutting off his horn was not enough to hide his true nature.

His mother scoured the land until she found something to help her son, the Amulet of Dusk, that could be used to cast a powerful illusion on him so long as he wore it. With this amulet and the cutting of his horn, they could pass Skyfall off as an ordinary pegasus. While his parents hated the extremes they went to, if word were to get out that an alicorn had been born there would have been revolts and the kingdom would have been thrown into chaos. Not only that but Skyfall would have surely been killed.

They soon knew however that cutting off his horn was not a fix to conceal his magic. Every time there was a full moon Skyfall would surge with magic and his horn would grow back. Due to the fact he was never trained in magic he could not control it and had to be locked away on nights of the full moon. The next morning his horn would be removed to prevent his magic being used. If he were to accidentally lose contol for even a moment out in the open then no amount of illusion magic could save him.

Even as a foal he knew that he was the cause of his parents distress and worry, often feeling guilty about it and hated that he was different. Because of the risks Skyfall was not allowed to play with other foals and would be kept inside for his own protection. His mother would reassure him though that he was as normal as everyone else and lavished him with love and attention so he never truly felt lonely.

It changed when his parents died when he was 4 in an accident. He did not have any friends or other family he knew of so the loss of his mother hit him hard as she was the only one that truly cared for him, his father unfortunately just did not have the time to spend with his son due to his duties. Hearing of the death of his sister and her husband, King Corvus stepped in and took the young prince under his wing and had him raised to become his successor. Corvus is aware of Skyfall's true nature as his sister left him a note explaining everything and asked for his help should anything happen to her, but refuses to speak of it; this causes some strain between the two as everyone in Spurnia is raised to hate unicorns and their magic. This hatred spread to being hateful and distrusting of all magical creatures. While Corvus cares in some way about the young prince, he struggles to look past his ingrained hatred. Despite this Skyfall looks up to Corvus and wishes he could be as strong and knowledgeable as his uncle.