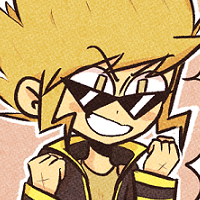 Orientation
Is under the impression he's a suave straight guy who's gonna get all the ladies, but in truth he's super ace.

An Oress Holder whose Oress gives him power over electricity. This would make him a formidable opponent if he wasn't so... Thyx.

Thyx is supremely confident in himself, claiming to be super cool and suave and TOTALLY METAL. The truth, though, is that Thyx is a very nice and incredibly cowardly boy trying to pretend to be some kind of slick and powerful casanova. Spend more than 3 minutes with him and you'll realize what a huge dork he is... though whether this makes him endearing or annoying is highly subjective.

If Thyx were to describe himself in a few words, those words would be things along the lines of "cool, awesome, radical, strong, handsome, intelligent..."

These claims are... debatable.

In his own words, Thyx is TOTALLY METAL. He's the coolest dude to ever exist. He's attractive, smart, powerful, charmismatic, and no one would dare to mess with him! He truly, genuinely believes these things, but the truth is a little less metal. His attractiveness is subjective and he might be compelling to a certain sort of person, but he's not very bright and though he has potential he's not particularly strong, either. He tries too hard, influenced by television and other media to become the archetypal "cool kid": he uses cheesy pickup lines, randomly combs his hair at every opportunity, uses hip slang (that's actually pretty outdated), acts as dramatic and hammy as possible in combat, unironically quotes anime in serious situations, and hangs around jukeboxes whenever possible. Thyx does not know how to operate a jukebox.

Despite the air he tries to put on, Thyx is cowardly and screams at pretty much everything. He's easy to frighten, not hard to beat in a fight, and he's so used to being turned down that he can be awkward when someone actually gives him the time of day. He'll usually just end up talking about his Sonic fan-character, Thyx the Edgehog. He's totally metal!

Thyx is naive, overly optimistic, and surprisingly innocent for someone of his upbringing. This makes him easy to lie to and manipulate, and even after someone has wronged him he often won't really realize it. He believes in the best of people and is sure that anyone can be redeemed, especially if they just hang around The Thyxenator enough! Additionally, having been born to participate in the Competition, he doesn't see being physically attacked as damning as someone else might; any battle is like a friendly fight to him, and if he dies he doesn't take much offense since it only takes a few minutes for him to come back like new. He'll still freak out if he sees someone else being hurt and he doesn't take pain that well; he'll use his edgy voice and act tough, but he'll also cry. A lot. Good thing he always carries around Spongebob band-aids!

Overall, though he's not exactly the person he claims to be, Thyx is well-meaning and just wants to be likeable. He's extremely nice, supportive, and friendly. He believes in everyone, especially his friends, and will never hesitate to back up an ally or cheer them up when they're down. He's good at motivating people in his own dorky way and never lets despair get to him. He'll have his rough patches, but he'll always get back up! People are counting on him! He's counting on him! Thyx the Edgehog is counting on him! With the power of metal, anything is possible...!

Thyx knows nothing about metal. He mostly listens to Sonic music, Smash Mouth, and Taylor Swift. Thyx stands at 5'7", but he probably counts some of his ridiculous Super Saiyan hair in that measurement. His eyes and hair are the same matching goldenrod color, and his skin is a lighter version of the same color. His build is extremely average despite his claims that he has "massive guns" and "incredible abs." Like all Tested he has Tested anatomy as well as X marks embedded into the backs of his hands.

Thyx is always about looking cool, making sure to never be seen without shades and an awesome coat. He takes pride in his anime hair, keeping a comb on hand to slick it back when the time calls for it. The time is most of the time. He's sure to wear some cool tight pants all the time too, alongside some... ordinary tennis shoes. Listen, they're comfortable, and he's really proud of his ability to tie the laces!

Thyx comes off as a kid in many ways, especially his body language. Every emotion of his is blatantly obvious and it's very rare that you ever catch him sitting still. Honestly, he's probably never sat still in his life! Even when he is just sitting around he's probably bouncing or rocking or fiddling with something. He's a busy bee - he's gotta get that sick electric energy out!!! That's what he calls it, anyway.

You would think perhaps metal, but actually he smells like french fries.

Like the other Oress Holders, Thyx woke up one day in Castle Oress without any memory of who he was. He was abruptly informed of the Competition: an upcoming deadly game hosted by a woman named Opine Frazil where the last person alive in the Test Reality would become a superior being known as one of "Them." Thyx was terrified. He was going to have to kill everyone to become a divine being? Even these confused, colorful strangers in this cool castle with him? How was he going to do that? Did he even want to?

Thyx decided his best bet at winning the Competition was to make allies who would protect him and kill people for him. He was way too nice and squeamish for murder! Having little to no memory to go off of, Thyx relied on the internet and TV to find out how to get people to like him. Using what he learned from media, Thyx became the coolest kid on the block and everyone loved him.

Well, that was the plan. Actually, almost everyone in the Castle Oress Alliance thought he was annoying. Worse, they grew angry with him for not training seriously. But, why did he need training? He was already perfect! Well, that and, more importantly, he actually really didn't want to hurt anyone. He just wanted to hang out with everyone! He wanted to make friends and do cool stuff together! But everyone was so glum and serious and afraid because of the Competition... he didn't want to be part of it. That was all too dark for him! He was okay with things being a little edgy - edge is cool, right? - but it was becoming kind of suffocating. It wasn't the cool kind of edge... it was just a blanket of anxiety and resignation to a grim fate.

Thyx did his best to keep morale up, even if all that did was ensure that no one would ever take him seriously or want to protect him! Someone had to try and have a little fun! Someone had to prove that it was worth having a good time before the Competition began!

A year or two later, Thyx was continuing life as normal when he decided to hit on a cute girl at the cafe! Turns out she was a reality-bender named Verity in charge of monitoring the Competition. She was also bitter, hostile, and eager for the Competition to begin - an event she triggered by fatally stabbing Thyx and watching him die.

Thyx spent the rest of the Competition in Limbo, rooting for the Castle Oress Alliance from there and feeling secretly relieved that all he had to do now was watch! Besides, if he hadn't totally let Verity get in a pity kill he would've like, totally wrecked the Competition. Would've just been unfair, you know?

In story canon, after the Competition concluded Thyx was revived and returned to the Test Reality along with the others, now under the leadership of a council of the Test Reality's most prominent members. In RP canon, Opine declared the winner a cheater and proceeded to bring the Competition to a new Reality, subsequently starting new Competitions over and over again in what came to be known as the "cycles."

Thyx wasn't super involved with the cycles that took place in future entireties and didn't form any significant connections. One time he got wasted at a party hosted by fellow Oress Holder, Priste??

...Nothing came of this, because Thyx got horribly lost on the way there! But the power of weird fanfiction has brought him closer to Dicro Corrune, who he keeps dragging around everywhere! When not hitting the town, he usually hangs around the mostly-abandoned Castle Oress with whoever else chooses to take up residence there. Usually just Cel, though he did meet this cool chick named Arcana recently.

He did eventually find his way to Maple Manor... but he's currently running around screaming because he thinks everything there is going to kill him. He's only partially wrong.

In the future, Thyx will end up attending Hell College thanks to Dicro needing to borrow his SICK CONVERTIBLE THAT HE HAS SOMEHOW. He'll be the coolest member of the Hell College carpool, joined by Dicro, Ignis, Ansaiele Alleviesse, and Celethia Ophidene! They'll be like the Three Amigos, except one of them hates him and two of them are total strangers to him!

Thyx's Oress gives him the power to create and control electricity. He can not only use this to use lightning against his enemies, he can power anything requiring electricity and make things annoyingly staticky!

Thyx (the Oress) is powered by excitement, which Thyx (the person) is full of! This should make him a powerful opponent, but for better or worse he's kind of incompetent. He hasn't trained much, so his potent potential has mostly gone to waste. Furthermore, he's cowardly and doesn't really actually want to hurt anyone, which hurts his combat abilities.

Like all Tested, Thyx has an accelerated healing factor and is mostly made up of soul. Since he lacks bones and organs (aside from a solidified concentration of soul that serves as a heart), he can only be killed via "blood" loss, major injury to the head or decapitation, severe bodily harm, or destruction to the heart.

Click a character's name to view their profile! These are only a few of Thyx's relationships; check his links page for more! "Dicro is a cool dude! I love hanging around him! He makes friends easily, and I can see why! He's the nicest guy I know... aside from myself, of course! But he's getting there!"

"Iggy is one of the coolest guys out there! We used to be worst enemies, but now we're totally buds. He doesn't want to admit it, though, cuz he's got one of those dark and edgy personas. That's cool, though, I can respect that." "Ansaiele is a newer friend, but she's the nicest gal I've ever met! She always listens to me talking about whatever, and she joins in, too! Have you heard about her Sonic OC, Sleepy the Sheep? She's pretty awesome, and she's one of Thyx the Edgehog's best friends!"