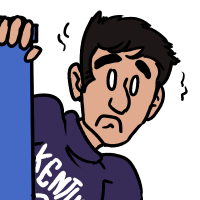 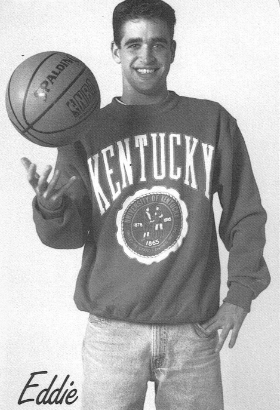 "BUFF IS THE ONLY WAY TO LIVE!"

Drew and Eddie man the sports desk on the sports TV station ROOTNET SPORTS. Their drivetime sports call-in show is called Sports in the Morning with Drew and Eddie. It's the kind of noisy, fast-paced call-in show where the hosts scream everything, barely listen to the callers' questions, and would rather talk about every sport other than baseball, even though the brand-new Root Baseball League is the talk of the town, and baseball coverage (thanks to Dag Dag and ASTROBOT) is the pride of the station they work for.

Between the two of them, Drew is the rock and Eddie's the mess. He's terrified of, among probably a lot of things, 12 year old girls, and ghosts-- too bad for him, since the station's lead reporter is a ghost. Whenever Eddie sees Dag Dag or even when he's mentioned, he'll be crying and hiding. He once threw his shoes at the ghost while on the air, and Dag Dag's still pretty insulted about it.

Eddie is very dumb and excitable and macho in the jocky sort of way where he only ever wants to talk about sports and thinks getting buff is the solution to every problem. On the show, he interjects every line with miscellaneous irrelevant sports catchphrases. Alley oop!!

He apparently accidentally fathered a child and regrets it, but whenever Drew asks about it, he changes the subject.

Eddie's typically wearing a Kentucky sweatshirt and roots for the "Kentucky Beach Boys," a basketball team who are apparently (as of February 2017) leading the Western conference.

Both hosts are teenage boys, along with station director Clayton and most of the callers, because for the game I play these characters in I use, Action League Now! style, miscellaneous in-joke characters and physical objects as the NPCs-- the teens are cards from 1988 board/card game Heart Throb, where they're among the dating candidates. There are several guys holding sports equipment in the game, but no baseball players.