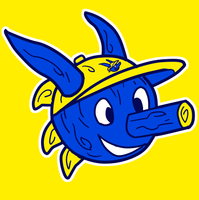 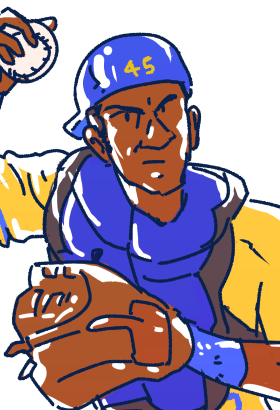 The greatest baseball team Western Canada has ever seen.

I know how it is, Toyhouse: video game fan characters are all the rage! Who doesn't have some Fire Emblem, Final Fantasy, or Pokemon OCs, right? Well get ready kids, because I have 100 years worth of fan characters from my favorite video game-- Out of the Park Baseball.

(If there is literally any other human being on planet Earth with OOTP OCs, please god tell me.) OOTP is a baseball management sim famous for three things: its incredible depth and realism, its wacky flavor text storylines and news headlines, and impeccable facial hair. I'm sure you can already tell why it's my favorite game.

I'm not making individual profiles for these guys, but I made tabs for my favorite players on this profile-- you can see those on the left.

I have two main save files in OOTP: the one you may already be familiar with is Root League Baseball, the sim league I run for and with my friends (that's the one ASTROBOT is an NPC in; the team I manage in that game is the Gowanus Mutants, whose mascot is Sludgey the Whale, and who literally play in a Superfund site).

But the other one is my personal franchise and WaffleFoxAlpha's hometown heroes, the Prince George Swamp Dragons, the most successful team in the British Columbia Baseball League's storied 100-year history. (Click those links if you want an insane amount of detail on history of the team or league-- god, if there's anything I love more than baseball, it's stats and compiling Google docs, apparently, lmao) Home to a record 15 Hall of Famers (including the incomparable starting pitcher José Vázquez, who was voted in with 100% of the vote on his first ballot-- take that, Babe Ruth!) and possessing a towering 11 Canada Series pennants, Prince George is a juggernaut in the improbable baseball hotbed that is Western Canada, despite all the fans and big bucks their hated rivals the Vancouver Americans have to throw around. May the Swampies' next 100 years be just as successful!

If you're wondering how British Columbia can support 24 major league teams, how a GM can live to be 128+, or why a team from Prince George is called the Swamp Dragons of all things... yes, that's the magic of OOTP!