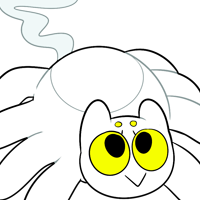 Xisea is a spider ghost about the size of a softball who is the sweetest, purest person you will meet. She is effortlessly adorable and everything she does is 100% CUTE. Xisea has the mentality of a child and is incredibly naive and innocent. She sees things in black and white and her vocabulary is limited to words with three syllables or less. Xisea is a very emotional person, but lacks the ability to easily process and understand her emotions, or the ability to clearly understand other's emotions. Because of this, Xisea is always worried about making people sad or unhappy, or having people be disappointed in her. However Xisea has Cyrus, who loves her unconditionally and is sworn to always be her friend, and with his help she's been able to make some new friends who appreciate her for who she is.

Before meeting Cyrus, Xisea was a pest in Castle Thantopolis. Helene, Queen of Ghosts, did her best to ignore Xisea, and the ghosts of the castle were scared when a huge spider tried to talk to them. Xisea spent most of her time alone and unhappy, and was too scared of being stepped on to leave the castle and visit the city proper.

Unlike most other ghosts, Xisea does not have the ability to fly. Neither can she remember anything of her life - not even how she died, which is usually the only memory ghosts hold onto. Xisea's tail is a long spool of ghostly spider silk that she can use much like an actual spider to hang from a wall or ceiling, although any spider's web she makes with it will dissolve over time.

Xisea is most often seen riding on top of Cyrus's head. She likes spending time with Cyrus and will do whatever he does, although she has to sit out his battle practices because his quick movements often mean her falling off his head. She likes Sag, seems to be getting along with Redburn, is somewhat distrustful of Trickster, and tries to avoid Helene because the queen is very rude to Xisea for a reason we don't know.

Xisea thinks Helene's dislike of her comes from her inability to read. She's ashamed of her lack of flashy skills, strength, and intelligence, but after having a heart to heart with Cyrus, she seems to have put the bad feelings aside for the moment.

As revealed in Chapter 12, Xisea has one special ability: to completely retrace her steps to any place she's previously been. This includes places she went while riding on Cyrus's head as well as the Sightless Maze from the Tournament of Souls.