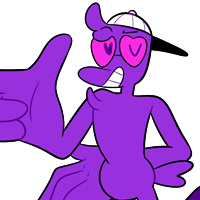 Whoa, dude, check out this totally radical bro straight outta the 1990's! He's called Trickster and he's here to show you how to be your coolest ghost self in the afterlife! Trickster is really all that. He knows the ins and outs of the city and has the lowdown on all the cool joints around town. Fun's the name of the game for this tricked out ghost, although his flashy stunts and impulsive decisions often lead him to need to make a quick getaway out of serious trouble, yo! Luckily Trickster's got slamming illusions powers that he can use to make a flashy exit. If you're looking for a ghost who's really chillin', you need look no further!

Trickster's really got the download on Thantopolis, but sometimes ya get this feeling from him that he's kinda shady... like he ain't who he says he is...