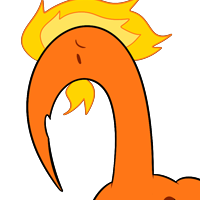 Ghost, formerly a rooster (or horse?? we don't know)

I like to describe Redburn as having the body of a horse, the fire abilities of a dragon, the head of a chicken... and the personality of a chicken. A weak-willed ghost, Redburn has been in captivity for his whole afterlife, forced to fight in a cockfighting ring despite his huge advantage in size and power to the average ghost rooster. When Cyrus frees him, Redburn latches onto Cyrus's magnetic personality and decides  he owes Cyrus a life debt - one he begins to pay off by offering to be Cyrus's steed for a deadly chariot race.

Redburn walks through his afterlife with trepidation. He's awkward and unsure of himself, usually guarded around people he doesn't know, and his social skills are underdeveloped. Meeting Cyrus helped bring him out of his shell, but he's still finding his voice and learning to stand up for himself. Even though he puts on a timid demeanor, if the situation calls for it, Redburn will always spring into action. He rarely second guesses the orders or suggestions others give him, which makes him a great team player.

Belying his cowardly nature, Redburn is a very powerful ghost with the ability to turn himself into flame and move incredibly fast. He's also quite large compared to other ghosts, especially other animal ghosts. One wonders if his size and strength come from a particularly tragic end...?

Redburn's name is a Legacy Name. I  had a character back in middle school with the same name. He was a small reddish toy that came with this realistic black lab plush doll; as a character, he was magical basilisk familiar. HoT!Redburn was going to be  a basilisk at one point too but I scrapped that as I got closer to beginning the comic.