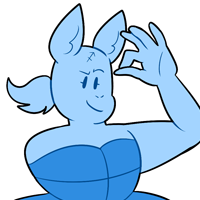 The Zodiac sisters are a collection of old and fairly powerful spirits who embody the signs of the Western Zodiac and guide their mortals along the path of the stars. Sagittarius should be the restless, adventurous and spontaneous person that Sagittarians are known to be, but after being imprisoned for forty years by someone she thought was one of her sisters, Sag suddenly feels a bit adrift in the world and in her role as a Zodiac Sister.

Sagittarius is very congenial and makes friends with people very easily. She isn't afraid to stand up for what she believes in and is very honest and finds it hard to keep secrets. She's loyal to the people she trusts and dedicated to helping the people who help her. Her emotions can get the best of her at times, however, and you don't want to be the person she chews out in a bout of anger. Sometimes, when she's in pursuit of her specific goal or belief, she can become short-sighted and lose focus on important details, but her focus and dedication makes her a great fighter and very good at following difficult plans.

Sagittarians are known to be curious, and Sag has lately been asking a lot of questions about herself and the person she wants to be versus the person she's expected to be. What will become of those questions and that dilemma is yet to be seen...

During the Rome Arc, Sag voiced her concern of feeling adrift from her purpose to Xisea, but as the events of the arc went on, she realized that even if she's changed, she still means something to people, something they feel like they can take hope in. That emboldens her a bit, although she does get thrown on a bunch of emotional roller coasters that test her newfound confidence. By the end of the arc, she's focused her emotions and her energies on leading the rest of the cast on a mission to retrieve Cyrus from a nefarious party.

As the spirit of the Archer, Sagittarius can easily summon her hard light bow and arrow and shoot with incredible accuracy. She can manifest arms and legs when she needs them, and rarely fires her bow without centering herself with her legs first. A direct hit from Sag's arrow will cause a ghost's form to destabilize and the ghost will be missing (temporarily) certain limbs or body parts. It is also pretty painful, but not as deeply painful as an arrow of ghost energy would be. Because she isn't a ghost, Sagittarius takes it upon her self to challenge or question Helene when the queen makes decisions she doesn't understand.