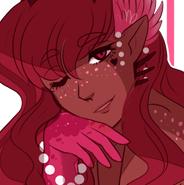 A Vetehi who was abducted from her home planet at a young age by Heaven College. This was done by Heaven College to provide a wider variety of life inside of its labyrinth, exposing students to new species... to learn to hate and kill, of course. Anthuria feels little hatred toward Heaven College since the constant influx of new students gives her plenty of flesh to feed on, and she figures if anyone manages to kill her then she deserves it for being weak. As Heaven College's bodies of water are all connected she switches her location regularly, tempting students to draw near and devouring them when they lower their guards. She enjoys collecting things she takes off of her victims, especially jewelry and alcohol. Has a secret love for greasy, fatty foods.

Content Warnings: This profile frequently mentions death and the fact that Anthuria happens to have a taste for human flesh.

Anthuria was brought up to embrace her existence as a Vetehi, taught to eat what she wanted when she wanted. Her entire function is to weed out Heaven College students who cannot resist temptation, so she's encouraged to lure them in. Should they fall for her, Anthuria gets a meal and either the student respawns with a valuable lesson learned or Heaven College has one less student to spend resources on. Quite pleased with this deal, Anthuria has become a seductress of the highest order, drawing people in with her sweet voice and practiced body language before digging her fangs into their flesh.

Anthuria enjoys playing with her food to some degree, especially if they seem untrusting or endearing. She likes to have to work for her meal to some extent, since the anticipation makes the flavor that much better. She might court someone over a few visits, perhaps getting a gift or two from them before sealing the deal.

If you spoil her enough, she might just end up liking your company too much to kill you. Careful, though: if you stop dropping by and make the mistake of crossing her path again, it'll be the end of both your relationship and your life.

Anthuria's interests seem limited. She enjoys relaxing, eating, drinking, flirting, and enhancing her appearance. She might seem interested in what others talk to her about, but one can never be sure if she really cares or she just wants you to think she does. She does seem to like exploring, but even then that's mostly to find exciting new prey to hunt... Anthuria, species-wise, is a typical Vetehi, having primarily normal traits. Her lack of a back spike is rare, however, and while still taller than the average human her 20'0" height is made mostly of her tail. As she was captured by Heaven College while still very young and was carefully raised to appear as human as possible, it's easy to mistake her for a decorated human while she's submerged in her spring. She has dark skin that seems to almost have a pink tone to it, wavy dark magenta hair, magenta eyes that are seldom fully open, and pink freckles dotted across her upper body.

Though Anthuria doesn't wear clothing unless a future meal offers her some, she still has a sense of style. She loves collecting accessories off of her prey, especially jewelry. She favors pearls in particular, though she also enjoys diamonds. Anything with flowers incorporated will get her attention, too, as well as sparkles. She also fancies boas, and feathered things in general...

As something of a professional temptress, Anthuria's body language is always alluring and teasing. Her movements are smooth and sultry, evolving naturally as she learns more about her chosen prey's tastes. Even in professional settings her demeanor never seems to change much: by now acting as such is just her default state of being.

Despite spending all of her time underwater, Anthuria nonetheless always smells strongly of roses and champagne...

Low, smooth, and seductive - the sort of voice you can feel coiling around you. Anthuria speaks slowly and languidly, always sounding like her every sentence should end with a heart. She uses adverbs liberally and is a master at changing her tone to charm someone.

Anthuria once lived on a planet where Vetehi were a native species. Presumably she had some sort of family, or maybe a hunting group - perhaps she even had friends! But at some point in her youth she was abducted by Heaven College and had her memories erased to make her more compliant. She was raised and analyzed by the staff, never pushed far from her natural Vetehi instincts. In fact, they told her to embrace her desire for flesh: they intended to drop her off in the school's vast labyrinth once she matured, serving as a setpiece, foe, and trial.

Once she was fully grown, Heaven College's staff placed her in a spring in the Casitas layer of the labyrinth: a bright, gentle landscape full of water and white flowers. Anthuria's placement would serve as a test for students who braved the labyrinth: if they fell for Anthuria's charms, it would be clear that the student wasn't ready for the next layer. By resisting her, students could prove that they were capable of ignoring or managing their temptations.

...Of course, since Anthuria was taken after Heaven College began its swift nosedive into bigotry and coldness, her presence had another purpose. By making her the only Vetehi in the labyrinth, Heaven College could villainize her entire species and drive in the fact that any non-angelic species must be destroyed for the good of Entirety.

Anthuria is unaware of Heaven College's ulterior motives, and frankly she couldn't care less either way. As long as a steady stream of prey keeps coming in, she doesn't mind her situation. Thanks to the various bodies of waters in the labyrinth being interconnected beneath the surface, Anthuria can travel throughout the different layers as she pleases and has enough changes in scenery available to her to keep her satisfied.

She has met a few interesting characters who seek freedom, however, and while she has little issue with her superiors it could be fun to break up the monotony...

Anthuria hasn't been roleplayed with yet, so check back in later!

Though Anthuria claims to have healing abilities, in truth only the waters of her spring do - insisting people enter the spring to be healed is simply a ploy to get them in her clutches.

Aside from her charisma - which is all natural - Anthuria has no special abilities. Her nature as a vetehi does give her sharper teeth than usual, however - a fact she's careful to hide until it's too late for her prey to escape - as well as the ability to breathe underwater. Her tail is also more than long enough to constrict others, and she has a particular talent for distracting others as she strangles them so that they don't realize what's happening until they're too weak to free themselves.

Click a character's name to view their profile! These are only a few of Anthuria's relationships; check her links page for more! 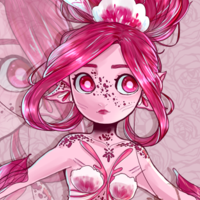 "A darling little thing. How I love to see her face when I stop by! The fear, the anxiety, the hesitation, the knowledge she has no choice but to trust in me... yes, I'm certain we'll be close friends for all time. ♥" 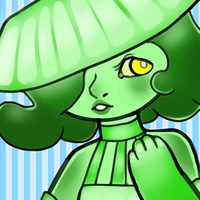 "Seems she's a professor with a special closeness to Tulippa and some rather interesting motives. Now, I could say more... but I think things will be much more fun if I don't. ♥" 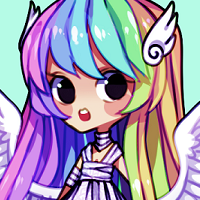 "A delightfully clumsy little treat. She's welcome to stumble into my spring whenever she'd like. My appetite is never sated. ♥"