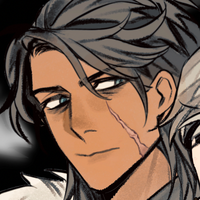 Aurelio Claudius is a 39 year old syndicate group leader. He's 1 of 8 leaders in the Lammergeier Syndicate as their Consigliere, with his insignia ranking being three gold chains hanging over his left shoulder. He wears a fur collar jacket, houndstooth patterned suit jacket, and a black and white shirt/tie set with a gold tie bar. As with the rest of the syndicate, he wears black leather gloves. He also has a scar on the left side of his jaw. His syndicate alias is "Raging Bull".

Aurelio, most often called "Boss", is generally a quiet and reserved man that doesn't say much. He has a cold, emotionless disposition and has a hard time displaying and expressing his feelings (like a very, very awkward looking smile). Most of it's kept internally. He's just a little socially awkward. He's not emotionless like he appears to be, he's actually very emotional in his own way. It shows through in little instances... Like his eyes widening like a deer in headlights as soon as Valentine says something stupid. Despite being tall and stoic looking, he has more heart to give than he shows through words alone with a high empathy level considering his occupation, much to his disadvantage. He's considered the "softest" of his syndicate because of his patience and understanding, but still has the ability to do as much harm as the others in his group if pushed. He's just not a fan of causing unnecessary conflict and making things worse off than they need to be. He offers sagely wisdom to those who need it, albeit bluntly. Being Consigliere, he has good communication skills despite keeping what he says to short sentences. And even with his cold appearance and intense job, he's very accepting of others and their eccentricities. He ended up being a fatherly figure to a lot of them, though unintentionally.

He has a complicated relationship with his apprentice and best friend: Valentine, who has a major obsession with him. He's more generous and patient than he should ever be with him, having a soft spot for Valentine in particular due to their past history. Aurelio has a guilt complex for being the man to recruit Valentine to become a Hitman, and because of it he's much more lenient with him than anyone else in his syndicate. Though some things he won't budge on despite how much he insists, like a romantic date or sexual exploits. Valentine does his job well despite how he acts, so it gives him incentive to advocate for keeping him hired. Boss just wants to help him and not give up on him, saying he's misunderstood for who he really is by everyone around him. The two are close, enough so that Valentine is considered his personal bodyguard (since he's around him all the time anyways). Aurelio's role with him can best be described as a mentor, guiding him when he needs to be (whether Valentine wants to hear it or not). Aurelio spends a lot of time worrying over him and dwelling in the past. He deeply cares for him, whether he openly shows it or not. He knows Valentine is troubled and has seen and experienced it, and wants to be able to help him through it all.

Family-wise, Aurelio has a younger sister and a niece. He loves them dearly, but he unfortunately can't see them often due to his job. His sister is on good terms with him despite his line of work, while his niece is oblivious since she's young. He treats his niece as if she was his own daughter, doing anything and everything for her to see her happy. That includes letting her braid his hair, bringing back anything she asks for, and staying with her until she falls asleep after a nightmare. The rest of his family doesn't talk to him. Besides that, Camilo can almost be seen as family to him. Camilo helped him with adjusting to life in the US after leaving Brazil, and the two confide in each-other as "fellow South-Americans" (in Camilo's words). They've been friends for about 20 years at this point. Though he often... Irritates him with his pushes to "give Valentine a chance", he accepts him for who he is just like everyone else, weird quirks and loudmouth personality and all.

Boss is self-conscious in general and has low self-esteem. Only the people that are around him often really notice since he's good at covering it up; ironically a part of his self-conscious feelings include having other people notice that about him. The little things like looking too long at his scar wear him down internally, causing him to visibly recede. Deep down, he's more sensitive than he likes to let on. He's thought to have depression with everyone around him insisting that he does, but he doesn't actively try to seek diagnosis or treatment. He's a closed book and prefers to keep it that way, even if it'd help him. He spends most of his free time either by himself or with Valentine, and often isolates himself for peace and quiet or a nap. And when his stress gets on his nerves, he resorts to cigars and light drinking to take the pressure off of his mind. He doesn't open up, either. Only Valentine and Camilo can see those parts of him, but just a glimpse without the full extent of his thoughts and concerns. Though mysteriously, a large part of those gloomy feelings go away as soon as Valentine is with him...