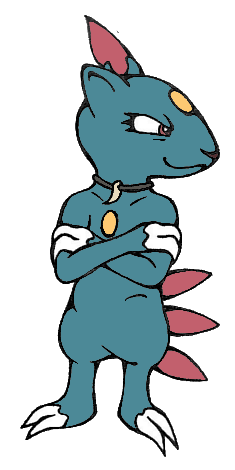 Sinierevel is a cunning little Sneasel who wears a Quick Claw around his neck. He's 90 cm tall.

Sinierevel spent pretty unrestrained life despite being owned by a trainer before he met Saga and her team. He had been causing havoc among a small village with his never-ending pranks, so the villagers asked Saga to take the Sneasel away. His trainer also agreed to trade Pokémon with Saga, and that's how Sinierevel joined the party.