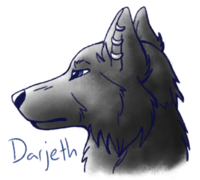 Wolfdog (1/8 wolf, the rest is dog breeds like Saluki and Belgian Shepherd Groenendael) 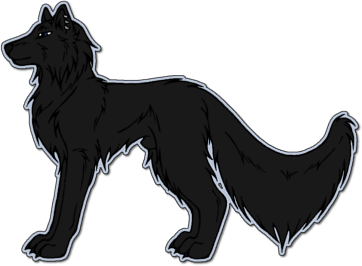 Darjeth is devoted, faithful, calm, polite, obedient, religious, careful, pessimistic and distrusting. He doesn't like to reveal much about himself to anyone he doesn't know all that well. He's very interested in history and also very proud if his well-known family line.

Darjeth is a well-balanced mixture of elegance and strength. He has pitch-black fur that is especially long in his tail and cheeks. His eyes are deep blue and he has three silver earrings in both of his ears. He is 75 cm high and weights 40 kg.

Darjeth and his two siblings were born for Ileya Kermaharja and Koeth Musta. The latter one was one of the most influential members of Lahko, being the only son of Misery Musta who originally brought Lahko to Andriaana. The puppies were also taught to become loyal and honorable members of their family and Lahko, and Darjeth internalized these teachings very firmly. They didn't prevent him from joining the pack of Befalas, though, even if he was so far the only member of the family of Musta to belong into any pack.

For the two first years of his life Darjeth just adventured around Andriaana and tried to learn as much as possible about the history of the island and its inhabitants. But soon his life was about to change: some other members of Lahko blackmailed the current leader of Befalas into leaving her place in order to protect her puppies, and as a member of both Befalas and Lahko Darjeth was ordered to take become the next leader. Darjeth felt pretty bad about how he had gotten his new title and he was more than just a little nervous under all the pressure, but he still tried his hardest to make the best out of the situation. He tied new connections to neighboring packs and got several new members to join Befalas until he heard some unfortunate news, as the former leader of Befalas had been killed off despite her honoring the deal she was pressured into. It made Darjeth feel quiltier than ever, but he had no time to dwell on it, because his mentally unstable aunt had given birth to puppies and they needed someone to take care of them as the mother wasn't able to do that herself. Darjeth and all of his siblings were given one puppy to raise, and that's how the young leader became the foster father of Yovic.

After getting himself tied into the positions of both pack leader and father Darjeth's days were fully booked for a long while. He taught Yovic, took care of his territory and even ran some errands for his family whenever he could. He took precise care of every one of his responsibilities, but still disasters seemed to find their way into his life. This time it was about an attack made by the clan of Puolikuu, a family trying to fight against Lahko. Several members of Lahko were lost in the fight, including Darjeth's mother. The whole family mourned and swore revenge, and soon enough they indeed took part in yet another battle and killed some of their most powerful enemies. But the circle of revenge was endless, and not long after that poor Yovic was slain. Usually so calm and collected Darjeth realized he was now in open war.

The months after that went by in a bloody haze. Darjeth turned his pack into a more organized group of canines, cut ties completely to a neighboring pack of Carmis which was the home of Puolikuu and spent a lot of time planning their next steps with other members of Lahko. After Darjeth had become the leader of Befalas Lahko had made its way into another packs, too, namely into Djala and Femor. First they took down the already weakened wolf pack of Edera and Carmis after that. Afuel was the one to survive the longest, but eventually it had no choice but to surrender. And so Darjeth lived to see the day when Lahko ruled the whole Andriaana.

Darjeth's life became understandably much easier when he had no significant enemies to worry about. The war left its marks, sure, but all in all Darjeth was finally very content in his life. He took a female named Meera as his mate, they raised a bunch of puppies together and Darjeth reached rather old age before dying for natural causes. In his last moments he really felt like he had filled his purpose in life.