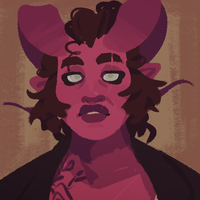 Dustlight Heart of the Storm

Do not use my characters in your RPs or TTRPG games. They are for my personal projects only.
Work in progress

Charity picked up a sword at a rather young age — there's a lot of value in learning to protect yourself, she thought, and especially so in learning to protect others. It's no surprise then that when she reached adulthood she had already started to settle into the life of a mercenary, offering her sword to protect travellers on the roads and helping to deal with the dangers of living too close to the woods.

One particular job took her into the Deepweald to track down and deal with whatever it was that was breaking in and eating the local livestock in the dead of the night, and to her surprise what Charity found in the woods was not a beast, but Rosalie — not the culprit behind the eaten the sheep, of course, but she had apparently been hired for the same job by someone else. They quickly hit it off and with stars in her eyes Rosalie took her hands and exclaimed that they should form an adventuring band!

So they did, and over the next few years they met Cadyrelle and Warlon and went on many grand adventures together. But all things come to an end, eventually.

Nowadays, Charity is a humble smith with a knack for crafting beautiful weaponry — though most of her time is spent forging horseshoes. But nonetheless, she's always prepared to provide travellers with the gear they need to keep safe on the roads.

As young adults, they had a blossoming romance full of adventure, charged feelings, and excitement. Eventually, though, the life of an adventurer began to take its toll. With Warlon having returned to his guild to present his masterwork, then the confrontation with Rosalie's father... it was time to make some decisions. And so Charity did, deciding to study to become a blacksmith.

And through it all, Charity went from apprentice to a journeyman with a little forge of her own in a quiet village called Losten, a few days north of Withewicke. In some future time, Charity might forge Rosalie a beautiful dagger inlaid with delicate golden roses. Perhaps she might propose with it, and perhaps this dagger might be the masterwork that lets Charity walk the tables from journeyman to master.

But that future time has not yet arrived. What has arrived, however, is Elwyn.

One fateful day, there was a knock on Rosalie's door — and thereupon her doorstep stood a three year old girl with an uncanny resemblance to their old adventuring partner Cadyrelle, the man himself nowhere to be seen. When asked where her parents were, the only answer Rosalie could get was a giggle and a finger to the lips.

Elwyn wants nothing more than to be an adventurer like her parents, but she's eight years old so she's strictly forbidden from touching anything in the forge, and pretty much anything that comes out of it. But there's nothing that brings her more joy than listening to Charity tell her stories about the Roses!!