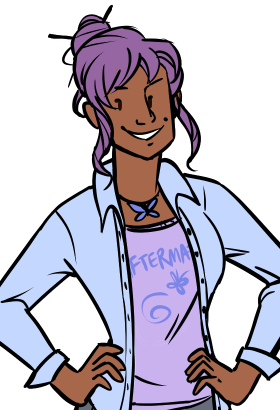 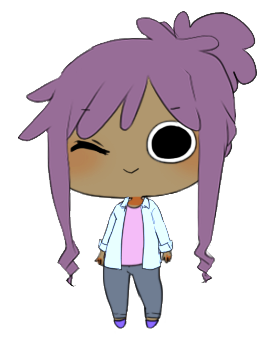 Cheerful Kalyani is the perky and capable face of front of house operations at cult DIY rock club The Great Mistake. She mans a little desk just inside the front door of the venue, where she sells tickets, runs the coat check and lost and found, and redirects anyone unwelcome in the club to the bouncer, Topaz, with a smile. Her desk has all the essentials: a stack of music magazines to while away the time, a Sharpie to X the hands of the underaged, a stick of deodorant for the smelly, a bullhorn for the problematic, and most importantly, a decoy duck named Jeff.

With Carrots she works on various advertising efforts for the club, and with Lyle, the two of them make up the venue's street team, distributing flyers for future shows. She's good friends with Lyle and Topaz, her partner-in-front-door-crime, and personable with everyone. She's friendly for sure, but not even slightly naïve: she lives for the chaos that is the beating heart fueling the music venue, and she loves being a part of what makes it tick.

Kalyani loves soft purples and pinks, and she dresses neatly, typically in band t-shirts and button-downs at work. She's got a deep well of musical knowledge and delights in chatting about other people's band shirts and patches.

Carrots is Kalyani's boss, and as two sides of the face of the venue, they work closely together on efforts like advertising shows. They're good friends.

As the bouncer, Topaz is Kalyani's partner by the door in dealing with guests. They make a good team and they're close friends.

Lyle and Kalyani are also friends, and they work together on things like being the venue's street team, and other miscellaneous tasks that need doing.

Silver's soundboard is beside Kalyani's desk, and they're friends, too.

Kalyani and Red don't interact as much, but they get along, and Red's stories are always entertaining for a listen.

Kalyani doesn't much care for Qiana, if she's honest, but they mostly just let each other be.