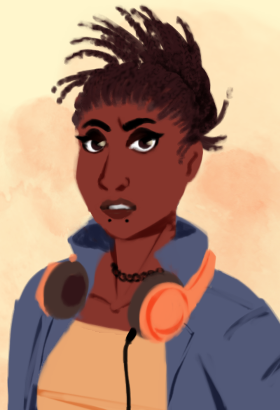 The asshole house D.J. of The Great Mistake. 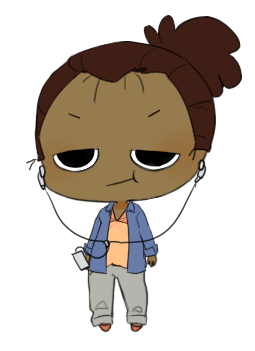 Qiana's the house DJ for the popular Brooklyn music venue The Great Mistake.

She thinks she's hot shit, and frankly, she's probably right, if the adoring regulars are anything to judge by. That said, she's also got attitude enough for the whole venue. Being adored suits her great at as long as her booth separates her and the unwashed masses. She only has time for her cool DJ friends, of course.

It's obvious Qiana loves music, but otherwise it would be easy to assume she doesn't like anything. Apathetic and full of young urban ennui, she's here to smoke and make snide comments and look very aesthetic while doing it.

She's the sort of co-worker who isn't outright malicious, but certainly will never go out of her way to help anyone, and won't volunteer useful information unless explicitly asked. Qiana's ultimately pretty harmless, but that doesn't mean she has to be nice about it.

She and Silver aren't exactly friends, but they're stuck with each other and they know how the other ticks. Topaz has even less tolerance for her bullshit, so Qiana knows not to push her. Big Red and Qiana mostly stay out of the other's way. Qiana also knew Roadie back when he was an actual roadie, and they got along ok.

Qiana has her hair in thin dreads usually tied up at the back of her head. She has snakebite piercings, a nose piercing, and some ear piercings, and she wears some jewelry, including a number of rings.

She's somewhat fashionable and likes to look effortlessly cool, but not overly flashy. Orange and a deep fuchsia are the colors I most associate with her.

As the sound guy, Silver's the coworker that Qiana works closest with, and she has some fun messing with him, but she doesn't really mean it.

Carrots is her boss, and she won't really say it, but she is thankful for the venue he's created and the opportunity he's given her.

Qiana and Red have little in common, but he's an interesting part of the scenery, to her.

Topaz is the coworker least tolerant of Qiana's bullshit, and she kind of respects that.

Kalyani doesn't much like her either, but they mostly leave each other alone.

Qiana thinks of Lyle as a puppy, really, and she sometimes amuses herself by seeing what tasks he can be persuaded to take on. 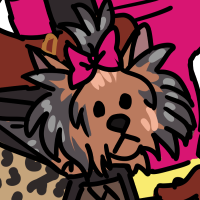 Tiffany is Qiana's tiny, delicate Yorkie. Fierce and protective, she hates everyone who isn't her doting owner. Qiana loves to dress her up and carry her around in a dog purse.