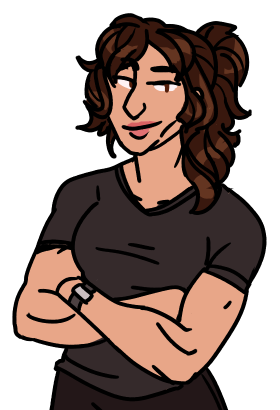 The bouncer. Sweetheart of the rodeo. 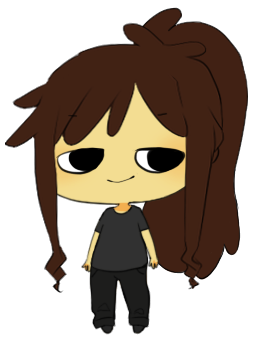 Topaz is the bouncer/door woman for the music venue The Great Mistake.

Belligerent drunks would do poorly to underestimate her for being female. Rumors say she's also an MMA fighter. Is it true?

She's seen all the tricks, and Topaz isn't not fooled by anyone's fake IDs. Take off your sunglasses, kid. You don't even look like an Enrique.

As tough and no-nonsense as she is, Topaz is also very nice. She remembers every face that passes through the club, and greets all the regulars-- even if they've only been there once before-- like family. How have you been, darlin'? Long time no see!

She loves her girlfriend Marianna, and as far as her co-workers at the club go, she's buds with Silver, friendly with Big Red, and utterly unmoved by Qiana's bullshit.

Topaz looks like the badass she is, tall and buff and imposing. She has curly or wavy brown hair usually tied back into a practical ponytail. Marianna is Topaz's gentle sweetheart of a girlfriend. Topaz adores her and will always be her knight in shining armor.

Topaz and Red are good friends, and as the security team for the venue they work well together.

Carrots is Topaz's boss, and while she thinks he sometimes overburdens himself, she respects him and what he's built The Great Mistake into.

Topaz isn't as close with Silver as some, but they're plenty friendly.

As Topaz's neighbor by the door of the venue, Kalyani is a good work partner and friend.

Topaz doesn't work closely with Lyle, but she thinks he's a good kid.

Topaz has no patience for Qiana's nonsense-- not from a place of anger; just from the place of someone who deals with young people trying her patience on a daily basis. Qiana's learned not to push her, though, and they have peace.