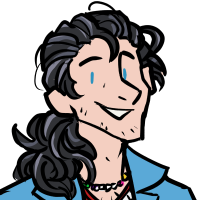 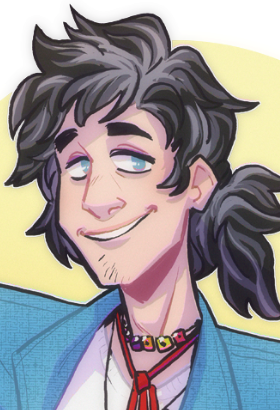 Hippie soundguy. The heart of the venue. 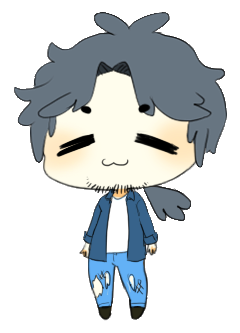 "Hey, if you had a band, it'd be called something like the Tasty Tasty Fishsticks."

He's seen a lot of things happen both in front of and behind that stage, and though he loves his job, while he sits behind his soundboard he thinks about what it would have been like to live a wild life like his parents, and in the middle of things himself. He daydreams of adventure, but maybe he should be careful what he wishes for?

Silver is superstitious-- maybe comically so-- and he decks himself out in luck charms for any occasion, just in case (the area around his soundboard is also a sight to behold). He's friendly and affable and easy to get along with, and he never really gets angry about anything. He avoids confrontation, but he's not a doormat or naïve, and he knows how to handle himself with his co-workers and the musical acts who pass through.

He's teasing with his friends, especially his old buddy Roadie, and they have a long-standing relationship of mutually giving each other shit. Silver is funny in a sneaky, deadpan way, and though he's easygoing, you can't really get anything past him. If a topic is important, he may be nice about it, but he won't let it go.

Silver is open and genuine, and if you ask him something about himself, he'll tell you all about it, even if it's embarrassing. He's uncomplicatedly honest and among the truest allies you could hope to have.

He once chased a band of hungry pirates out of his friend's apartment while armed with a broomstick bo and a t-shirt over his head for a ninja mask. Would I lie?

Ask him about the "Chicken Dance Rap" if you want to see the face of true shame.

Silver is lean and pale, with blue eyes and long, wild curly hair that's mostly gone gray already, usually tied back in a ponytail to keep it out of his way.

He generally has some scruff on his face and a number of miscellaneous bracelets, wristbands, necklaces, and keychains going on, mostly different kinds of luck charms. It's also typical to see him with several old wristbands from concerts on his left wrist.

(Since it's not too clear in his ref, around his neck he's wearing three things: a red ribbon, a string with a bell and an old green bank keychain that says "EAB Full Service Banking," and a friendship bracelet/necklace with his name in block letters. They're items with personal significance-- mementos from his past-- but if you're drawing him, it's not necessary to use that much detail. Essentially, he just wears a lot of miscellaneous things on his person, and he's superstitious about them.)

He likes the color blue and he's usually wearing soft old bell bottoms, checkered sneakers, and some kind of comfortable cotton shirts. His style in clothes is simple.

Silver is interested in aliens, cryptids, and the occult, and he definitely believes that the truth is out there.

He's lactose intolerant, not that he really heeds that at all.

He can play the xylophone and glockenspiel, thanks to his school days. He's somewhat embarrassed, given the middle name that his parents gave him, that he's not any good at guitar.

Silver is the resident FOH (Front of House) Engineer for a local music venue owned by his friend. He controls the mixing boards located behind the rear of the audience, and mixes the audio that the crowd hears through the venue's speakers. Don't spill your drinks on his soundboard, ok?

Silver's parents were, as you can probably guess, giant, artsy hippies-- they met at the Woodstock Music & Art Fair, fell in love, and falling in love with the artistic scene there, moved to upstate New York together to start a life. He was an only child who spent a lot of time growing up around his parents' artist and musician friends, and it shows.

Of course what Silver does is an art too, but he's probably the least "artistic" in his family in the sense that he isn't a creator, and privately, Silver sometimes feels kind of insecure about it. He's good at his job, though, and he loves what he does-- he thinks there's something magic in bringing music to the people, to revealing its truest form.

Carrots owns the concert venue Silver works at, and they're long-term friends who have built the venue and the music festival they run into institutions to be proud of.

Roadie is Silver's best friend from the days when Roadie actually was a roadie, and they get together often to shoot the shit and give each other guff about whatever's happening in their lives.

Mocha and Silver grew up together, before her family moved away. They dated once, and they're still friends.

Qiana is a DJ at the music venue Silver works at. There isn't exactly any love lost between them, but they're stuck with each other.

Topaz is the bouncer for the club. She and Silver are friendly.

Big Red is head of security at the venue. He's definitely a character, and Silver likes listening to his wild stories of rock and roll.

Kalyani is an invaluable part of the venue, selling tickets, running the front desk, and working with Carrots on advertising. Her desk is right behind Silver's soundboard, and they're good friends.

Lyle is the jack-of-all-trades for the venue, and on any day, you'll see him, Silver, and Carrots working together.