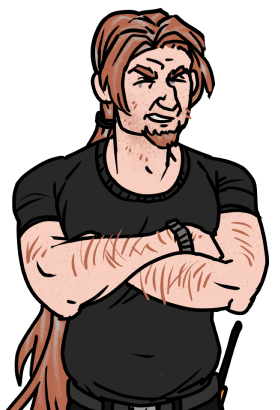 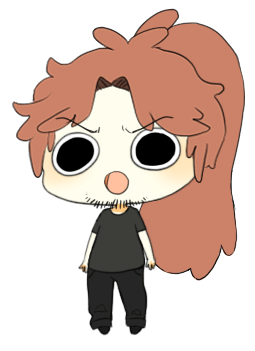 Big Red is the head of security for the Brooklyn music venue The Great Mistake, and you'll typically find him back of house by the stage and the performers. He isn't as big or as red as he once was, but the nickname is so inseparable from the man that most of the people in his life don't even know what his real name is. He's the kind of guy everyone would call a character, to put it lightly.

Red is a veteran of the rock scene, and this is the only life he knows. He ruined his ears long ago, so he uses hearing aids now. It definitely seems like he's done a lot of drugs in his time, but hey, who's judging?

He's gruff, but everyone loves him: his co-workers (except probably Qiana) and the club's regulars alike, because he's hard to forget-- but unlike the quick-minded Topaz, he never remembers anyone. Say hi to him at the club several times a week and he won't know you.

Red is full of wild, entertaining stories that don't make a lot of sense, but you get the feeling they're at least based in reality-- or what Red remembers of it, anyway. When Roadie was around, he loved egging him on to get these stories out of him, and Roadie used to joke with Silver that this is his future.

He's the kind of guy who's always on about some new thing that he insists is the wave of the future (these are a few years too late for the canon, but think QR codes or bitcoin), and if anyone is going to fall for a Ponzi scheme, it'd be this guy. It's also easy to get him going on some half-sensical rant, like the hidden motives behind how much the PATH train to Hoboken sucks. Red doesn't really know he's funny, but he loves his job and this is where he really is living his best life.

Red has the build of a guy who was built like a brick house... twenty years ago. He's still big, but he's considerably softer than he used to be. I still wouldn't recommend messing with him.

He has very long, straight red hair past his ass that he keeps tied in a ponytail at the base of his neck. It used to be a bright red, but it's faded and graying now.

I've never drawn him "out of uniform," but he's the sort of guy who wears t-shirts all the time anyway, probably old band or festival shirts. He doesn't much care what anyone thinks about his looks.

It's not visible in his refs, but he wears hearing aids.

Red and Topaz typically work different parts of the venue, but together, they're the security making sure nobody becomes a problem. The two are friendly and enjoy each other's company.

Carrots is Red's boss, and even though he's much younger than him, Red respects him and what he's done for the industry.

In some ways, Silver could be said to be similar to Red, and they're friends at work, too. Silver likes hearing Red's wild tales of rock and roll.

Red and Qiana have the least in common of anyone in the Great Mistake, but on her best days, she's amused by him, and on their worst, they ignore each other.

Red and Kalyani don't interact as much as some of the others, but they like each other in a general way.

As the jack-of-all-trades, Lyle runs around interacting with everyone in the course of working a show, and Red's no exception, of course. Red doesn't have much of a close, personal opinion of the kid, but he appreciates his work ethic.