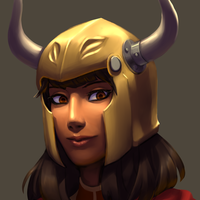 Marcia doesn't do things halfway. She takes no prisoners. She pushes the knife all the way in. There's something of a fierceness to everything she does, always full of intent and feeling. If something doesn't catch her fancy, she doesn't bother herself with it.

Starved of affection and lasting bonds throughout her life, she is constantly seeking attention of any sort, and no place awards more attention than the arena. She truly knows how to work a crowd, and has a flair for visual spectacle that her audiences love so. Even outside of the limelight, she wears a persona, pretending that her insecurities—neediness, fear of abandonment—don't exist, insistent that those who point them out must be joking. Flaws? What flaws? She only knows the stage, only knows how to perform.

She flirts with almost anyone she finds attractive; most respond eagerly, and then she becomes the ghost in the night to them, giving them an evening to remember and then leaving without a trace.

With abilities that allow her to manipulate the physiological and emotional states of those whom she touches, Marcia is often forced to confront moral dilemmas about autonomy and freedom when using them. She'll make the necessary sacrifices to secure the least harm for the most people.

The first person to give Valeria a name was the patriarch of the domus to whom she was sold as a slave. When he attempted to assault her, she killed him with her powers and fled into the protection of a fellow slave's friend, the doctor Tadla, who made her an apprentice. Tadla came to be like a mother unto her.

Two years later, Tadla was captured during a Vandal siege. Valeria then took the woman's nomen and cognomen, Junia Paetina, and signed up to be a soldier, using her powers to manipulate her way around rules that should have barred her from entry. She killed and interrogated Vandals in the hopes of recovering Tadla, but the woman was nowhere to be found even after they had laid waste to the largest camp.

Junia Paetina now gave herself up to a gladiator dealer and was sold to the colosseum at Carthage. There she became increasingly famous as a highly entertaining battler, to the point where the Emperor Alexius himself asked that she be bought over by Constantinople.

Impressed with her inaugural battle there, in which she killed five bulls, the emperor awarded her the agnomen Marcia. Given a doorway to success, she went on to climb society while maintaining her career in the colosseum.