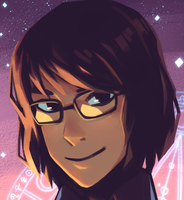 Nameless is a bit kooky. They collect things, stray bits and pieces from souvenir shops, or picked up off that poorly-swept street corner—rocks, bottlecaps, parts fallen off of an old doll—certain that they'll come in handy in their rituals eventually. (They usually do.) Their sense of humour is almost as abominable as the ghosts that pursue them, involving an unholy combination of puns, gallows humour and offal jokes.

When they become interested in a certain subject, they will plunge neck-deep into the literature surrounding it, incapable of thinking about anything else for weeks on end. Lately, they have turned their voracious attention on the subject of ghosts and exorcism. It's not just necessity that drives them to study the supernatural (though it is mostly necessity): they find the entire subject endlessly fascinating, and eagerly devour every gory detail pertaining to it.

Being cursed to hell and back has given them the impression that they would've died long ago if they were meant to. As a result they've become increasingly eager to take dangerous risks without any mind for the possible repercussions. They've made it this far alive, it couldn't hurt to wager more on this gamble for their reprieve.

Despite being rather high-strung, they've come face to face with the most gruesome of ghosts often enough that they aren't particularly shocked when it happens anymore, just annoyed at the inconvenience.

Nameless inherited a curse from their mother, who fell for the classic "your firstborn's soul for what you desire" ploy when she called upon the demon Malphas for relief from the memory of her estranged partner.

Due to the effect of this curse, Nameless has found themself increasingly a magnet for vengeful ghosts and other kinds of spirits and the undead (because of the way the Singapore branch of Death operates, it's usually vengeful ghosts). Hungry Ghost Month in particular became a downright nightmare for them, what with these ghosts spilling of the afterlife in the droves, swooping food off the roadsides.

Much to their (already existing) bad luck, the ghosts they attracted ended up casting more curses upon them when they mistreated them unthinkingly in the hopes of being rid of them. Ultimately they took to studying the hybrid arts (magic combining angelic and demonic powers) for solutions to their ghost problem. It is a dangerous game, but they are far more meticulous than their mother was.

Throughout their studies in demonology and exorcism, Nameless has learned that in order to break the base curse wrought by Malphas, they must collect three bizarre and rather vaguely described items: tears shed for the curse-victim, the despair felt by a dying being, and the blood of the curse-wreaker drawn at its strongest. How they will obtain these, is anyone's guess.