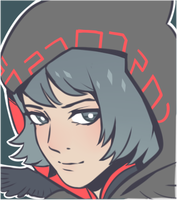 A playful deity who wears mystery like a mantle, Morrígan likes to have fun with their job of pursuing the souls of the imminently dead. When you're immortal and your job barely takes up a fraction of your day, there's not much to do in way of passing time besides pretend to be a human, trick people into mistreating you, and then watch them squirm when you reveal yourself to be the Phantom Queen herself! It certainly gives one a good excuse to mark souls for death.

While they could shapeshift to any form they choose, there are a handful that they like to revisit on the regular: the raven, the heifer, and three different women, typically to ensnare men.

For millennia Morrígan has joined the armies of mortals, to taste blood, to select the slain, and to send them portents in the night. They derive amusement from their reactions to their omens, which can range from subtle to absolutely grotesque. Over the millennia, they have come to find humankind both exceedingly foolish—particularly hero types with an overwhelming arrogance and an inability to choose their battles (ahem, looking at you, Cú Chulainn)—and fascinating for their quirks and habits.

Morrígan never forgets a grudge, and every individual who has pissed them off has earned a place on their blacklist. These poor souls are doomed to be stuck in the infinitely long queue at the border checkpoint into the Otherworld for all eternity.

Few know of Morrígan's kinder side, as the overseer of livestock. They love cows almost as much as they love ravens; it bewilders some that they should rule over both, but decay is essential to the turning of the wheel of life, after all.

Morrígan was born the child of Ernmas and Delbáeth, into a clan descended from the great mother Danu herself. While their sister Ériu became the pop-star Goddess of Ireland and had the entire island named after herself, Morrígan did not take on quite so grandiose nor popular a role: they were accorded the task of marking souls for death, and escorting them to the Otherworld.

As the overseer of death, particularly on the battlefield, and one in charge of foretelling it, Morrígan plays a role similar to that of reapers operating across Europe and America. Sometimes they find their hand moved by the voice of fate, which stands above and beyond even the gods; sometimes they have a choice over the matter of who lives and who dies.

They sends their ravens out to tag the imminently dead, and to warn them of their impending demise. Then, when the time comes, they arrive to collect their due.

To Morrígan, this is a mercy: the freedom to prepare for one's death is not one that most enjoy. Sadly most seem to prefer to use this opportunity to attempt to avoid their death, locking themselves away from harm and inadvertently hoisting themselves by their own petards.