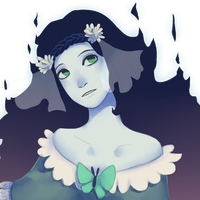 For someone who reeks of decaying corpses, one wouldn't expect Kalma to be as obsessed with cleanliness as she is. She is the housekeeper of graveyards: wherever she wafts by, fog and will o' the wisp follow, and corpses begin to wither and rot. It is through her touch that the taint of their remains may be returned to the earth so that they may feed the life that grows upon them.

Not many appreciate this tender-hearted goddess' commitment to her duty, bolting at the first whiff of her scent. The stench has begun to cling so tightly to her that people have come to (wrongly) assume she must be emanating it. No one can truly blame them; even her own parents can barely endure the odour when she visits their palace in the heart of Tuonela. All the same, this has greatly decimated her social circle, leaving none but one—her faithful dog Surma.

A hermit, but not by choice, Kalma finds herself having difficulty approaching people, let alone making friends. Only Surma, among all beings living, dead and immortal, can seem to withstand her smell. He serves as her only company on most days—he, and the stray souls she finds trapped in their corpses, finally dislodged by decay. She doesn't mind the loneliness overmuch, but she thinks it would be pleasant to have a friend someday.

Across Finland, the realm and goings-on of Death are managed by Oblivion Co., a vast family business owned by King Tuoni and Queen Tuoneta of Tuonela. Theirs is a most morbid family, whose every member has their own unique and grotesque obsession with the deaths of human beings (except for Kipu-Tyttö, she's a sweet). Oblivion Co. is in the business of employing its bosses' offspring—and there are a lot of those to go around—hundreds, in fact, each of whom specialises in a specific kind or aspect of death.

Kalma is the second daughter of the couple, and it was almost inevitable that she would join the ranks of the family business eventually. The role she was accorded (of utmost importance according to Tuoneta) was to return dead things to the soil by making them decay. Amid her family's illustrious history of perpetrating violent death and suffering among the living, she is a bit of an odd-one-out, drifting about on a breath of air and flame, quietly tidying up after her siblings and niblings after they've done the dirty work of squeezing souls out of corpses.

Over millennia working among dead bodies, the scent of decay has rubbed off on her, and her stench precedes her wherever she goes. Finland is a much cleaner, safer place thanks to her—imagine the hazard posed by diseased corpse parts lying on every street—but no one appreciates her for it, concerning themselves instead with getting as far away from her and her pungent odour as possible.