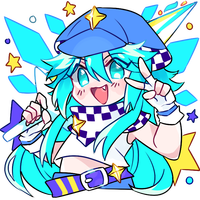 main nft no FH love him so much never

Tsukasa is an energetic ray of sunshine! The game loving student is the leader of the Draconia Club, an after school club at East Ace Highschool. But the unofficial name for the club is the "After School Game Club"-- because 90 percent of the time, they're playing games! He considers himself to be 25 percent student, 50 percent guild leader, and 25 percent game admin! (That's because he's a low ranking admin of his favorite game!) When he's not in school or hanging out with friends, Tsukasa is playing the popular VR MMO called Draconia Online. He's full of energy and compassion, which is why others tend to follow him. His leadership capablities and optimistic personality have earned him the title of "leader" for the game club, as well as for the guild. Together, the club aims to win the worldwide guild championship in two years! Tsukasa never gives up at anything, so they just might make it!

Design Notes
IRL appearance IRL, Tsukasa usually wears his signature jacket-- a bright red "crop top" style hoodie. He wears camo pants with a dark grey belt, and plain white sneakers. His optional accesories include pink and yellow hair ties, a yellow hair clip, colorful rings on his fingers, and two star-themed pins on his hoodie. All of these are optional, and he doesn't have to be wearing all of them at the same time. Additionally, he has some alternate outfits. For example, a similar red hoodie, except that it's not a crop top, it has short sleeves, and it has double white stripes on the sleeves. Underneath that hoodie, he can wear a long sleeved white shirt, or a light blue and white striped shirt. He can wear black sweats with a white stripe down them, or khaki pants.
In-game avatar In-game, Tsukasa has long hair, including sidelocks-- it appears sort of like an extension of his irl hairstyle, with the spikiness still being there. He wears an official-looking blue hat with a four-pointed star badge and a strip with a checkered pattern. He wears a white, turtlenecked half-cloak with a checkered pattern on the collar and near the bottom. On the half-cloak is a star badge that matches the one on his hat. Underneath the half-cloak, Tsukasa wears a plain, white, sleeveless crop top. He wears loose/baggy navy blue pants that reach a little bit past his knees, with two dark blue belts that have gold and silver buckles. On his left hip, attached to the belt, is a star badge matching his other two badges, and on his right hip, also attached to the belt, is a white pouch. On his right leg, there's also a yellow strip that resembles a pocket. He wears white, yellow-toed boots with a checkered pattern on the top cuff and two blue straps. At the heels of his boots, he can activate the Levitate ability, which is signified by holographic blue shards that float around the heels. The shards almost seem to resemble wings. As for his hands, Tsuskasa wears long, white fingerless gloves that come up to his elbow. On the gloves are blue straps. In-game, Tsukasa wields a white, wide sword. Half of the blade is physical, white metal, and the other half is holographic, seeming to consist of a blue, yellow, and white flame. So it's kind of like a half "lightsaber"!
Stats
Confidence
C
Intellect
C
Kindness
C
Patience
C
Humor
C
Personality
Energetic . Kind . Optimistic
Likes & Dislikes
Trivia Six years after the hero Azura defeated the leader of Operation CANCEL and became the rightful champion of Draconia Online...

Tsukasa is a new transfer student at East Ace High. He may be new in town, but he's brought all of his love for games and Draconia Online with him! From the very first day of school, Tsukasa gets to work on starting a Draconia Club, but at first, no one joins. He needs four other members to keep the club open, and things aren't looking good. But then, one afternoon, while running around school putting up posters, he slams into two students named Haru and Raiden! Another couple of students by the names of Takashi and Sho are also there when the incident happens, and everything starts there. Takashi immediately offers to join for fun, and his brother Sho decides to join with him. Haru follows, wanting to get more into social activites and feeling like he can trust the brothers. And finally, Raiden joins to try and be in a club with Haru, and with a desire to fit in. The four all join the club for their own reasons, but as the five of them begin to bond and endure hardship together, their desires to stay in the club begin to form for a common reason: friendship. All of them work out their seperate difficulties, and realize that the club is a place where they can feel safe and loved. Takashi, who has always been popular and therefore lonely in his own way, realizes that he has true friends that can see beyond his reputation. Sho, who has been a serious workaholic for a long time, realizes that he doesn't have to isolate himself, and that he always has friends to relax with. Haru, who has always been extremely shy, finds that there's no such thing as being "too shy" or "too small" or "not strong enough"-- and that he has loving friends who make him feel safe. And finally, Raiden, who has always had trouble fitting in and making friends because he's been misunderstood, and has often associated with bad people in an attempt to try and fit in somewhere, realizes that it's because he's different that he's amazing-- he's amazing just the way he is, and he has a place to belong with the club, who will always recognize him. These five friends, who are all unique in their own way, become closer to each other than ever imaginable, and together, they aim to win the guild championship. They all have a common goal to work towards, and as they work towards it , they share many happy memories!

Looks up to him, and also has a great time partying with him! The two of them are the "party animals" of the group!

Respects him a lot and admires his work ethic!! Looks to him constantly for advice, and sees him as highly credible. Also enjoys introducing him to fun things! They work together a lot, especially considering that Tsukasa is the leader and Sho is the strategist.

Appreciates him a lot! Tsukasa really loves Haru a bunch, and sees him like the pure bean that he is. Still, Tsukasa respects Haru a ton, and always makes sure that he has a chance to speak, and that he is heard. Tsukasa takes care of Haru like a little brother, and Haru looks up to Tsukasa a lot.

Tsukasa looks up to Azura SO FREAKING MUCH. When asked about his number one role model, he'll reply "Azura" in a HEARTBEAT. Tsukasa has been watching Azura's videos and epic feats since day one, and respects him with every bit of his heart. He has posters of him all over his room! Azura is definitely Tsukasa's idol. But little does Tsukasa know, his year 4 club supervisor and librarian is... Azura?! It happens to be that Tsukasa's school was Azura's old highschool, and while taking an undercover reunion break there, Azura ends up being pulled into becoming the new librarian to save the club room. He ends up going undercover for a year, and Tsukasa doesn't even know! But he'll figure it out eventually...right? 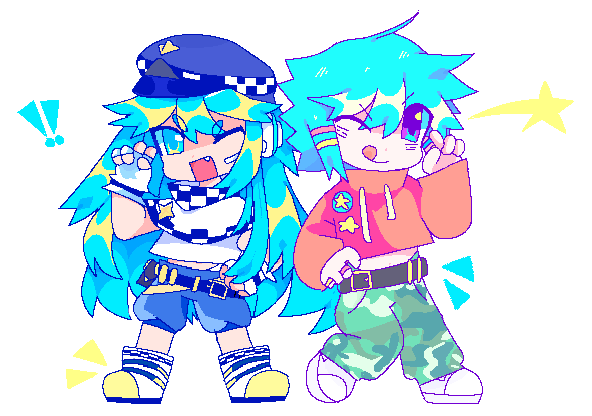