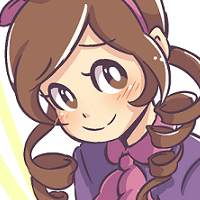 13 (but secretly as old as Entirety itself)

Tested (but secretly a Superior Being and the very concept of emotion itself; Ara is simply an avatar)

Terrible people, cruelty, thunderstorms, thinking of herself as Empathy, getting in trouble, that passive-aggressive "you're not in trouble but I'm disappointed in you" look, pain, small and dark places, violence, beach parties, loud noises, insects.

Ara is a sweet, kind, and friendly girl who will stop at nothing to make the people she cares about happy. She'll even sacrifice herself for strangers! She's incredibly empathetic and caring and despite her young age she's able to come to understand people very quickly. She's good at reading others and is very careful with them, seeking to help them whenever possible without unwittingly pushing them away.

Ara is gentle and all-loving, believing that everyone is capable of good and all people are able to be redeemed. She'll hear anyone out and try to reason with anyone, and as such makes a good mediator. Unfortunately, her pure heart is a big weakness of hers: she's often blinded by her desire for everyone to get along and be happy and becomes deeply hurt every time she's forced to confront the fact that things are never so simple and that some conflicts can't be solved, at least not by her alone.

In spite of her demeanor, she isn't naive and she's very intelligent. She's mature for her age and can handle dealing with adult topics, such as the death and existential unease the Competition forces all of the Tested to deal with. Though she's still a kid who cries easily and stumbles over her words and just wants things to be okay, she's strong and brave and won't give up when she knows there's something she can do to help.

Though she's always as gentle as she can be, Ara can be surprisingly stern when people are misbehaving, especially toward residents of Umbra's Mansion. She's responsible and likes to maintain order, so if people are causing trouble or wrecking things she won't hesitate to scold them and ask them to improve their behavior!

This, of course, all ties into the fact that her true form is that of a Superior Being. She doesn't like to discuss this with the few beings who know this, and in fact keeps herself blocked off from her powers and omniscience except for in times of desperate need. For all intents and purposes, Ara Eselle is truly Ara Eselle: a young girl who hopes for the best, not some sort of almighty goddess.

"I know I'm not very strong, but I'll do what I can to help! It won't be easy, but I know there's a brighter future for us if we just try and reach it!"

For most of Entirety's existence, Ara existed as Empathy beyond the fringes of mortal reach, uninvolved in matters of lower beings and with a disposition most would call cold.

One day, when Balance cast herself into the original Test Reality due to a petty bet with Time, Time turned to Empathy and poked at her indifference. How ironic was it that the embodiment of emotion was so still and unflinching? Evidently having nothing else to do, Time continued to bother her, doubting Empathy's authority over her own form.

Experiencing the facets of herself known as "irritation" and "pride", Empathy decided she would bind herself to the Test Reality and view life through the eyes of everyone in it - partially to serve as a referee for Balance and Time's silly bet and partially to "experience" the emotions Time insisted she lacked.

15,000 years later, most of that time in near isolation, Balance had won her bet at a grave cost and a new Test Reality was created. With the original Test Reality now empty, Empathy returned home to the outskirts of Entirety. There she remained for another few decades, pondering what to do next. She felt vivid, she felt alive. Seldom had she ever interacted with mortals, and binding herself to the original Test Reality had proved to her that Time was very much correct.

The facet of herself named "guilt" gnawed at her. What to do? How was she to punish herself for thinking so little of her vessels? Without them she was as pointless as they were without her. As Time had predicted, Empathy began to care.

She cared so much, in fact, that she reincarnated herself into the new Test Reality as a girl named Ara Eselle. She was sure to place herself in a toxic environment and to make herself stand out from other Tested: she deserved to feel pain, to feel sadness, to feel fear, to feel anger that could not be released. She was consumed by a desire to be human, to think of her true self as a separate being beyond her control. She locked away her power, suppressed her memories, did absolutely everything she could to be Ara Eselle and no one else.

As the Competition began its approach, Ara found herself running into a woman named Umbra Tear. Unable to leave a young girl to die a swift and cruel demise, Umbra adopted her into the alliance, where Ara quickly busied herself with trying to be anything but a burden.

In her search to experience the cruelty she brought to all others, she discovered that the facets of herself named "love" and "happiness" were the most painful ones of them all.

Umbra did her best to protect Ara throughout the Competition, but she was betrayed by her two most trusted associates - Ciess and Shan - who killed Ara toward the end of the Competition. In story canon, after the Competition concluded Ara was revived and returned to the Test Reality along with the others, now under the leadership of a council of the Test Reality's most prominent members. In RP canon, Opine declared the winner a cheater and proceeded to bring the Competition to a new Reality, subsequently starting new Competitions over and over again in what came to be known as the "cycles."

During the cycles, Ara stayed close by Umbra's side. Not being particularly combat-oriented, she focused on cleaning around the mansion and making small talk with those who joined Umbra's Alliance. Even though almost everyone who joined the alliance was some sort of villain or an otherwise unsavory individual, Ara trusted them and treated them with hospitality. Most of the others treated her with relative disinterest, which she wasn't offended by! After all, in a high-stakes game of life in death with the fate of the world in the balance Ara wasn't exactly expecting a bunch of tough and rugged warriors to have tea parties with her.

That being said, she did make friends! She became best friends with a girl named Aita Iire, who she spent most of her time around. She also became close to Ignis Phasmatis, who she came to view as a father figure due to his closeness with Umbra: someone she viewed as her mother. She also organized some Prinnies into helping her clean up around the place, made some bandits fix some windows, tried her best to keep Aita on her best behavior, became friends with another girl named Violet... all in all, things felt more peaceful than the Competition in her home Reality.

Things got more serious once the Competition returned to taking place in the Test Reality, accompanied by the suppression of almost everyone's memories. Thanks to secretly being a Superior Being Ara was immune to this effect, but that was the last straw. Opine - the woman in charge of the Competitions - was going too far and Ara became fearful of what fate awaited her loved ones. Resorting to desperate measures, she contacted Ignis (who was trapped in a prison Reality) and revealed her powers to him. Though she didn't want to just outright abuse her powers to "fix" everything, she promised to aid Ignis in overthrowing Opine and restoring everyone's memories.

By day she re-forged a friendship with Aita and went on misadventures with her, befriending Neren (her Reality's version of Death) and even becoming a magical girl named Seraphic Red at some point! Well... she had the costume, anyway. In the shadows, though, she and Ignis succeeded in restoring Umbra's memories and helped Ignis secure some vital connections.

Opine got bored with that specific Competition like any other, and since then things have been mostly peaceful. At the moment she's living with Umbra, Cenoir, Ciess, and Shan (the latter of whom she made up with) in Umbra's Mansion. More imminently, she's met a certain well-meaning intruder. Ara hopes she likes chocolate cake!

As Empathy, Ara is a Superior Being with seemingly limitless reality-warping powers. However, the Superior Beings find it unjust to use their powers for anything of note. Maybe for comic relief now and then, but nothing serious. Ara is a staunch believer in this philosophy and as such intentionally restricts her ability to use her powers. For the most part, all she's used them for in the past several millennia is contacting Ignis.

Like all Tested, Ara has an accelerated healing factor and is mostly made up of soul. Since she lacks bones and organs (aside from a solidified concentration of soul that serves as a heart), she can only be killed via "blood" loss, major injury to the head or decapitation, severe bodily harm, or destruction to the heart.

Aside from standard Tested features and her powers as Empathy, Ara is essentially a normal human child. She's small, weak, and doesn't have any formal combat training or magical abilities. But she's got the power of love with her, and that's all that matters!

She may or may not own a laser broom. Pray you never find out the truth for yourself.