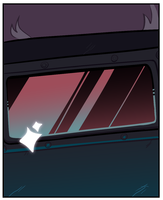 Do you know that once I had a dream-inside-a-dream-inside-a-dream, Inception style? It started one night when I was relaxing in bed, thinking of my character Panic. I then imagined Panic was sitting outside his apartment and thinking of what the lives of the people he could see on the street were like. Then, Panic began to think about a Private Eye. The Private Eye went to investigate a robbery. The old woman who was robbed swore it was a ghost, but the PI didn't believe in ghosts. He offered to sleep at the woman's house that night and catch any would-be robbers in the act.

Unfortunately for him, it was a ghost. After waking up three times, that wild three-layers deep dream became immortalized in the character of the Phantom.

The Phantom is for the most part an extremely passive character. He's recalcitrant, preferring to observe and not act, lingering in one place at a time. Because of that, he seems to be a very slow moving being, but when needed the Phantom is lightning-fast. His huge claws make quick work of anything in his path. With his permanent welder's mask visage and rattling chains, it's easy to mistake the Phantom for a villain or evil spirit, but he's not. That's not to say he's a hero - he's decidedly neutral in most things, and only intervenes in matters of grave concern.

If you hear the Phantom speak, you'll be surprised with his calm, relaxing voice. You might also be surprised by the retractable pair of gnarled, green-grey human hands peering from under his furry, beastly claws.