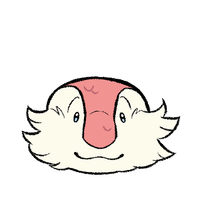 Cat's the epitome of an Apricot Bay native, happy to relax and hold down the fort while her parents are off traveling the world in their retirement. While she doesn't herself have the most exciting life, the last thing any armadillo particularly wants is excitement, so it doesn't bother her much. On the contrary: she's all too happy to invite the ever-stressed Sebastian into their meticulously-kept household for a nap and some board games, which is just how he likes it too.

...Maybe there's some love there, but don't mention it.

That's not to say Cat doesn't appreciate the occasional day trip or festival. She's always wondered what lies past the outer edges of the Valley Cascadia, maybe even out past The City, into the eastmost reaches of the state. Her ability to read vibes is also incredibly sensitive, perhaps otherworldly so, which is what attracts her to Sebastian even when he's trying his best to push others away, and what causes her suspicion that Kevin isn't all he seems...