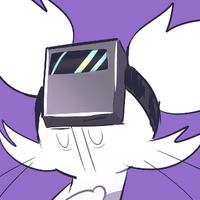 Dead (died as an adult)

The Ghost of Veld Tanta | She/Her

Another very old character, Veld became a ghost in 2009 and then became a huge part of a lot of my stories, because I really liked to draw her. She has two main appearances - her canonical self in the Panic and Post-Panic Universes, and her non-canonical self which is often seen hanging out with Iota and Asiago.

In life, Veld was an assassin for hire. She immigrated to America in her twenties and found work for a businessman with a shady side project. In her attempt to kill Panic, she accidentally died at his hand, and her corpse was stranded in a liminal space. Through forces she didn't understand, she was brought back into the world as a ghost and attached herself to the Welder's Mask. Veld had seven days to find the two people who saw her die - Panic and Cal - before she would be automatically dragged into the Orinthope. Before orinthropy, Helene found her and attached her to a Medium Charm. Later Helene gave this charm to Cal, and Cal and Veld became surprisingly good friends, despite the latter's actions in life.

As a ghost, Veld is snarky, pessimistic and grumpy. Her personality fluctuates between serious and silly depending on whose company she is in. Veld doesn't have much agency as a ghost and has learned to be a good sidekick to Cal when the two would go on recruitment missions in the Secret Days story arc. She treats Cal very respectfully and is more sober in her presence. She seems to have developed a more sentimental side as Cal has gotten older.

Veld is unique as a ghost because she passes through every single object. Ghosts in general can choose to pass through objects and can interact with normal objects up to two pounds in weight. Veld lacks either of these abilities; the only thing she can hold on to is the Welder's Mask, which she always wears. To make up for it, Veld has a very potent ability to posses both people and objects. She gains the abilities and powers of whatever she possesses. She doesn't enjoy possessing people, but she'll do it if she has to.

Veld is also unique because she retains memories of her life, vi-a-vi her proximity to Cal, the Muse of Memory. Even though many of these memories are painful and sad, Veld persists that remembering them will help keep her grounded as a ghost.

Veld has a particular appearance that I try my best to keep consistent. One of her ears has three prongs, and the other has just two.  Her eyes aren't really eyeballs but are more shallow divots on her face. Sometimes she pulls the Welder's Mask over her eyes. She always has a grey stripe on her body. Her arms are fairly bulky compared to her body.