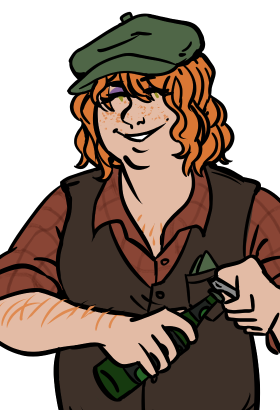 Tunes
This is Halloween - Danny Elfman (The Nightmare Before Christmas OST) 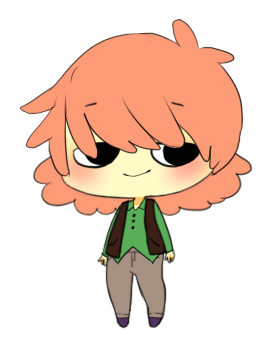 With purple eye shadow as bright as their smile, an encyclopedic knowledge of ska, and a mighty weakness for all things pumpkin spice, Augie is the friendly neighborhood bartender of cult music venue The Great Mistake. Despite their baby face, they're older than all the other staff besides grizzled rock veteran Big Red, and they've seen it all from behind their bar. Augie is friendly, but not a big talker, and like bouncer Topaz, they're happy to watch you make a fool of yourself right until the moment you become a problem-- upon which they don't mess around.

Despite their bar being essentially a card table under the DIY venue's stairs, Augie takes pride in the job; Augie is ever the professional, and always more dapper than any of their band-shirted colleagues. Augie has a warm, clever sense of humor and comes across as very approachable to the club's patrons-- but they're confident and command respect, and anyone who tries to pull some nonsense will easily (and genially) learn it's not worth wasting their time.

Alongside club owner Carrots, sound tech Silver, and head of security Big Red, Augie's been at The Great Mistake among the longest. The crew of the venue are a tight-knit bunch, and even if they're more understated than some of their coworkers, Augie is part of the backbone that make the club what it is, and it would be hard to imagine the place without them.

They like warm, natural colors: oranges, reds, browns, and greens.

Carrots is Augie's boss, and they've worked together for a long time. They have a good understanding of each other, and Augie can always make Carrots smile.

Silver runs the soundboard across from where Augie runs their bar. They're friendly, and can always commiserate.

Red's another coworker who's been around the venue for a long time. Augie and Red aren't especially close, but they respect each other.

Topaz runs the door, and therefore is Augie's buddy in dealing with problematic patrons. The two are friends.

Kalyani runs the front desk of the venue; the two aren't personally close, but they're friendly.

Lyle is the only underage member of the crew, and of course Augie takes no pity on him to pour him a drink. Augie's taken a shine to him, though, and likes to (gently) tease him.

Augie doesn't have much love for Qiana, but they're also not bothered by her: they're used to difficult personalities.