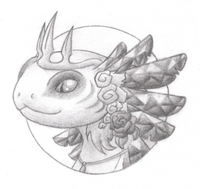 Protector of his mate Dream is certainly one mysterious dragon. First of all he has a very peculiar aura: he feels unnerving and even unreal to many, but at the same time he has some otherworldly beauty and charm in him. Secondly he only communicates with his mate Naemi, whispering his words for her who then says them out loud if necessary. And what little do other dragons know based on those words is that Dream isn't really a kind creature, but instead sincere enough to be rude as well as rather self-absorbed. Apparently he is some sort of protector of his mate, but no one is really sure how he would even protect her if such situation ever rose, as he seems to be completely unwilling to ever do anything resembling physical labor.