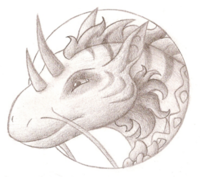 Horan was born in a very civilized clan compared to Seafoam clan. Galarith, Seafoam's merchant, was once doing some trading with the clan when he happened to hear about a young dragon who was aspiring to become a politician somewhere outside of his home territory. As there was really no one yet to take care of Seafoam's relations to other clans Galarith took the youngster, Horan, with him to the Sea of a Thousand Currents.
When he first arrived to his new home poor Horan was outright baffled of what a tiny, backwater clan he was brought into! It took him a lot of time to get used to his new environment, but eventually he did start to see some appeal in the more simple lifestyle - though he hasn't yet had guts to admit it out loud, as he feels like he has a rather fancy reputation to hold. He also eventually fell in love and is now raising their adoptive daughter together with his mate Painter.