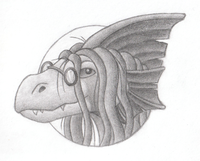 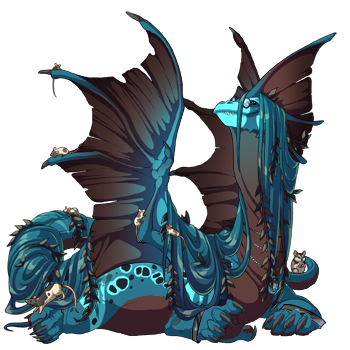 Saa is a peculiar Bogsneak whose position in the Seafoam clan is a  source of constant debate among the clan members. After the clan was  first settled, one day young Saa just appeared in the middle of it all,  confused of who were these unknown dragons who had settled on their  homeland. The clan members were just as surprised as they had not seen  anyone living in the area for the few weeks they had already been  around. They asked Saa to join their newfound clan, but they gave a  non-committal answer and disappeared back into the wilderness.
In the following years Saa has continued their life in the same vein,  suddenly appearing to spend time with the Seafoam clan members and at  some point disappearing back to their mysterious lair. Most assume it  must be located somewhere within the maze-like underwater cave system  that resides under the clan, but not many know for sure. Nonetheless the  Bogsneak seems completely harmless (albeit very eccentric) so most of  the clan members don't bother their heads with them too much, sometimes  even forgetting their whole existence.