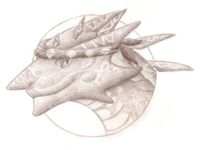 Theala was a fisher in her birth clan, too, and during a fishing trip she came to meet Lienn and Nightblades's son Ledhoulmm. After chatting for a while the two spontaneous Ridgebacks decided to switch clans with each other just for the heck of it!
After moving to Seafoam clan Theala became friends with Innas and Chrii, a same sex dragon couple, who wanted eventually to find a way to get offspring. Theala herself suggested that she could give birth to some eggs and let the couple raise them as their own, as she wasn't eager at all to become an active mother herself. Since then she has given Innas and Chrii a few litters.