This page serves as a basic, quick introduction to the Mags (my main OCs), with notes about profile completion and some small personality details. Hopefully it can help people get a fast and simple understanding of my characters!

The following chibis were all drawn by  ProtonBonfire, who does amazing work!!

You can view them all in-folder here, or read more about what a Mag Frag is here.

Mags born at the beginning of time.

The enforcer of Pya's rules and acting nosy leader. Despite his irritable demeanor, he's really just a traumatized baby. Please pet him.

Nonchalant shitstirrer who gave up on things like "philosophy" and "meaningful emotion" to indulge in whatever impulses arose.

Resident gossiper, but also the most normal guy around. Up for having tea with you, if he gets to hear about your relationship drama.

Cheerful fishboy stationed at the COR to keep it safe from threats. Misses home and the Mags but has an obligation to his job :'(

Mom Friend who struggles with controlling his overprotective monster side. Will absolutely bake you cookies and snuggle.

Funeral god, sort of. Also happens to be patron of animals and local zookeeper. Most likely found being moody around ravens.

God of dreams... or rather, nightmares. Sleeping constantly, weaving hellish dreams in order to help others "overcome fears".

God of war and death. Master of every weapon and his pals' sex lives. Knows all the gossip and is a little snide about it.

Hyperactive bastard working with Overseer Jubilee, his lover. Force of chaos with no attention span... except for ogling Joobs.

Once used as a battery for a giant machine, was freed by Kolo. Now going on a journey of self-discovery in a world he missed out on.

Communal IT guy, recording all of history down in a plethora of formats. Enjoys technology and mortal advancements.

Patron of random chance, plays around in private Timelines tweaking probability. Barely ever home, but loves Kvadrat and Prav lots. Romantic dating princes, politicians, and warlords in many Timelines. Also a hoarder of things, all sentimental and expensive.

Leader of the Mags, self-isolated to protect the others from his power. Starting to open up. Cute energy is through the roof.

Busy bee creating a Hivemind of mortals to share knowledge and experiences. Slightly full of himself, but well, he is a god!

Elusive fae deity who grants no-catches wishes if you can catch him. Patron of seasons and weather, changes outfits per. ice cold scientist (literally) who once dated a mortal, who died, as mortals do. Never got over them and now sulks in his basement.

Upbeat ball of energy kept childish by the others. Doesn't seem to mind, instead wants to do FUN THINGS! BECAUSE HE LOVES YOU!! Philosophy nerd who appears to mortals to interrogate their moral choices. Enjoys debates, discussions, and his bf, Linija.

Mags born at other intervals. Roughly sorted by age.

Anxious and isolated nervous wreck trying to shirk his ~destiny~ and ~responsibility~ by being the COR's office paperboy instead. Kingpin of the underground, a position he earned by being impulsive, scary, and strong. Erratic little shit who values cuddles.

Juice's BF and PR boy. Cheerful influencer on the surface, but jaded and cynical inside. Dependent on validation to exist, and hates it.

Victim of underground fighting rings until he tasted sweet, sweet freedom. Now he just wants to live domestically with Devy. 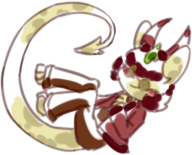 Host of Bereave's mind. Currently on a quest to slowly but surely "manipulate" everyone around him into their best selves. Smallest bug who was cute and adorable until he weaponized it as a facade. Now he makes fun of everyone. While making the :3 face.

Host of Genesis' mind. Very sad and suicidal due to constant traumatization, so he mostly clings to Jedana and cries. The saddest worm. Zmeya's codependent handler/doctor. Loves Zmeya unconditionally, even if they're unhealthy together. Has a bit of a temper.

Dissociative youngest Mag and super lonely because of it. Instead of befriending his peers, ran off into the arms of war criminals?!